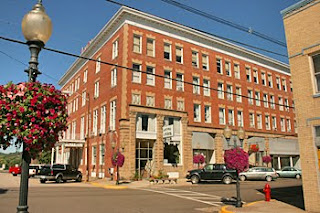 Firstly, here is a bone-chilling story from Barbara at Hole in the Donut Travels that loosely involves the US military, Moth Man sightings and Richard Gere. Her story begins peacefully enough with an arrival to the town of Point Pleasant, West Virginia. She checked into the Lowe Hotel - the only hotel in town. In Barb's own words, "I got a room for the night and was pleasantly surprised to find my room decorated in antiques and outfitted with a queen-sized poster bed. It didn't take me long to climb beneath the fluffy quilt, prop myself up with two down pillows, and get to work on the computer. And that's when the noises started..."
As we hear in the news almost everyday, climate change is one of the scariest things on earth. All that Kate at Kate Rambles wanted out of her birthday trip to Nha Trang, Vietnam, was some sun and seashells. Instead, she got the aftermath of a typhoon and had to grin and bear it through a haunted airport.
I didn't have too much luck in Nha Trang myself. In fact, I ended up in the hospital for a couple days to receive treatment for a ruptured ear drum that was caused by swimming in giant waves that were far too big for casual jumping and splashing.
Bret, at I Moved to Africa sent me a spider story. I hate spiders. In hindsight, perhaps I should have known that my solicitation for scary stories would bring out a tale about these eight-legged freaks. I have even hesitated to 'cut' and 'paste' an image, but in the spirit of Hallowe'en, here goes nothing.

Yuck.
Okay, I've got to bear down and confront this fear... Here is my own scary spider short story. When you get off at the public bus terminal in Siem Reap, Cambodia (the city close to the famous Angkor Wat temples), children will offer to give you bananas and if you decline to purchase, they will give you an offer you can't refuse. These little brats will put a tarantula on your shirt until you agree to buy a banana. Here are a couple pics of some fellow backpackers immersed in this local prank (photo credit: Kevin Naughton). 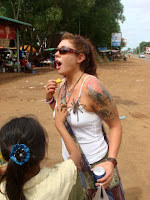 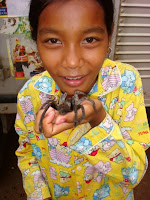 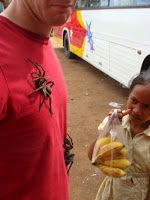 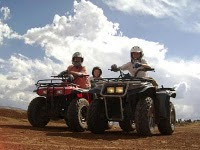 Moving forward, lets inject an action-packed thrill ride into this piece. Jason at Alpaca Suitcase takes his son and daughter on a self-proclaimed Death Ride In the Andes. This ride is complete with stray dog attacks and a torrential visit from Mother Nature. Fun for the whole family!
Living in Istanbul, I know first-hand the joy that a stray dog gets from lunging out at passing motorists.

Continuing along on the same theme, Shanna, from Grand Cycle Tour writes of a harrowing cycle through Albania's Llogara Pass. Cycling past countless roadside memorials she and her husband attempt to move forward without thinking about statistics surrounding Albania's shockingly high number of road deaths.
People returning home from time spent abroad always have stories about how they averted a gypsy scam or a dishonest cab driver. It's one of my pet peeves of travel; the fact that a lot of the time it's difficult to trust locals that randomly approach you. Jaded, you stand patiently listening to their story, wary of a scam, waiting until you hear the true objective of their visit. "My uncle owns a suit shop. You should come with me to buy a suit." "My brother has a guest house. I can get you in for a good price." "Hello... Pineapple?" No, thank you.
Vibeke at Photito's Blog shares a very common tourist scam from the City of Light. If you have been to Paris, the 'ring scam' has likely been perpetrated on you by a wandering gypsy. How you fared depends on how suspicious you are towards strangers. Don't get me wrong, I love meeting new people (it's why I travel) and some of my best friendships were born out of chance encounters on the road, but if you are a traveller, you have to know that more times than not, people that approach you around the famous sites do not really want to be your friend. Again, it's the hardest part of travelling for me, feeling jaded. 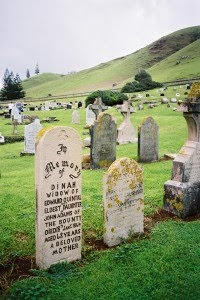 Okay, let's hear some more ghost stories. Anne-Sophie at Sophie's World has been to 'the most haunting place in the Pacific'. According to legend, this honour belongs to Norfolk Island, one of Britain's worst convict colonies.

Liz at Travelogged rummaged through Rufford Abbey, one of Britain's most haunted places. Read on, only if you want to get spooked. The 'ghost baby' stories are really creepy. Though, if you made it through the spiders, you'll probably be fine.
Let's conclude these scary stories on a humorously violent note. When friends visit me in Istanbul, I usually drop them off at a Turkish Bath (Hamam) for a couple hours. The Hamam I take them to is extremely authentic and the experience is very traditional. This is not a watered down, pun intended, tourist experience. Upon entering, I can always tell by my friends' expressions and body language that they are not comfortable and quite tense. When it's all over however, every time, they come out feeling like a million bucks. Shawn at Shawn Was Here articulates his hamam experience. Like most things in life, as a smart man once told me, "you just have to let it happen."
Thank you for stopping by. I really hope you enjoyed these stories and my contribution to the LP BlogSherpa Carnival series.
For more Lonely Planet Blogsherpa Carnivals check out Carnival #11 (Food Around the World), hosted and posted by Kat at Tie Die Travels. Carnival #13 (Magical City Experiences) from Denise at Travel With Den and Den will be up and running in early November.
What is a BlogSherpa? Lonely Planet has signed up the best travel bloggers they can find. They bestow the title of 'BlogSherpa' to the blogger and then publish the blogger's articles on lonelyplanet.com.
Posted by Joe Tuck at 12:58 AM

Who is this guy?